A Schipperke is a small thickset cobby black dog. The Schipperke is tailless. They should have a fox like face and a square body from profile. Males are distinctly masculine with coarseness and females are refined but not fine.

The Schipperke originated from Belgium. It is believed that the Schipperke was written about in the 15th century in the chronicles of Monk Wenceslas. Legend told of two shoemakers who fought over unwanted visits from the dog so one of them cut off its tail. This appearance was appealing to the breed and set the standard for docking tails.

Another legend was that two schipperkes saved the life of William of Orange whom was a national hero of Belgium and Holland, from an assassin.

The first known history begins in 1690 when shoemakers exhibited their dogs laced with collars hade made of brass. These collars were only worn for competition.

Schipperkes Origin In US:

The first Schipperke came to the US in 1889, flourished for a brief time but fell because of World War I. In the early 20's Miss F. Isabel Ormiston imported her first Schipperke. Up until World War II she continued to import the best Schipperkes she could find. In the 50's she imported a pair from England. She educated the public on the origin and history and wrote many articles. Her efforts established the Schipperke Club of America and the adoption of a breed standard. Most of the show winning dogs of today descend from Kelso Schipperkes. Miss Ormiston continued her hard work until she died in 1954. Many people continued in her memory and the love for these delightful little dogs.

The Official Standard set by the American Kennel Club states that the suggested height at the highest point at the withers is for males 11-13 inches, and for bitches 10-12 inches.

The Schipperke should be square in profile and thickset.

The expression of a Schipperke is questioning, mischievous, impudent and alert but never mean or wild.

The eyes are small, oval and dark brown.

The ears are small, erect, triangular and placed up high on the head.

The bite is scissors or level.

The topline should slope slightly from the withers to the croup.

The chest is broad and deep and should reach down to the elbows, with well sprung ribs. The loin is short with a broad croup that is well rounded with the docked tail.

The coat is short in the face, ears, and front legs and hocks. The coat is a medium length on the body and longer in the cape, ruff, culottes and jabot and should appear to stand out. The hair down the middle of the back starting at the cape lays flat and extends to down over the rump. The outer coat must be black, but the undercoat may be slightly lighter. Any other color than a natural black is a disqualifying fault as well as a drop ear or ears.

The gait of a Schipperke is smooth. It should be double tracking at a moderate speed. 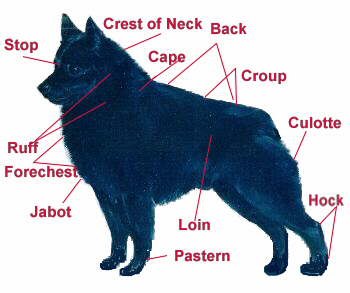 The Schipperke had to be a useful dog, he was used as a protector of home, shops and family. The Schipperke possess a strong sense of responsibility and loyalty to what is his. He should be suspicious of strangers and indifferent to them, slow to make friends, but once he has, he has a friend for life. A snappy dog does not possess true Schipperke temperament and they should not be so unfriendly as to snap at strangers.

The curiosity of a Schipperke is what makes him the perfect watchdog. He is interested in everything around him and nothing goes without examination and investigation. He has a keen sense of hearing and even though his size is small, his bark will run off any intruder. The Schipperke has been described as a little black devil by some including myself, but they will steal your heart. The Schipperke possess a gentleness with children that is remarkable, and I feel sorry for the poor individual who tries to bring harm to his family or home. I recently placed a Schipperke in a home, where the original Schipperke literally gave his life trying to save his master from gun shots from a robber. Their devotion cannot be matched.

The Schipperke is a wonderful vermin deterrent and will quickly destroy them. He loves to travel, by car, boat, or plane and is usually quite indignant when you leave him at home. He is gay, courageous and full of energy to the point that you can't wear this little dog out. He may get bored with the games you play with him and go off to find something more interesting to do, but his devotion never ends. He is at times very headstrong and even a little stubborn when it comes to having his own way.

IN AMERICA the Schipperke has been and is used for hunting squirrel, rabbits, woodchucks and pheasant. They work well as hearing dogs for the deaf, and really require little training for it. Their size is also a good factor here. Schipperkes have a few naturally inherited characteristics such as patty caking and literally smiling at you from ear to ear. You may think that your little guy is growling when he looks up at you and grins, but he is really smiling at you.

Schipperkes will dig and are wonderful diggers especially if they have found something underground such as a mole.

The breed does not usually possess any foul odour which many breeds do. They love the water, but in bathing a Schipperke you need to make sure that you get all of the soap out. The coat is thick and is hard to get wet to start with, but make sure that you rinse well.

Most Schipperkes are quite well behaved and a yappy, snappy dog is not a true characteristic of the breed. They are very hardy and long lived sometimes into their early 20's. Most tend to live anywhere from 12 to 18 years with proper nutrition and care.

THE FCI OR BELGIUM STANDARD

UTILIZATION :Watchdog and Companion, can be used for hunting.

GENERAL APPEARANCE - APTITUDES : Excellent and faithfull little guard dog, wary of strangers. Active, agile, tireless, always busy with what goes on around him, very protective of objects given to him to guard, very kind with children, knows the ways of the household, always curious to know what goes on behind a door or an object which is going to be moved, betraying his impressions by his sharp bark and upstanding ruff; seeks the company of horses, hunts moles and other vermins; can be used to hunt, indicates rabbit warrens, chases these and the hare in the copse.

HEAD : Fox-like. Forehead quite broad, narrowing towards the eyes; seen in profile, is slightly rounded; muzzle pointed, not too long, not too much stop.

EYE : Dark brown, full, more oval than round, neither sunken or too prominent, lively and piercing.

EARS : Stiffly erect, small, triangular, placed high; lobes strong enough, so that they cannot fold other than lengthwise, excessively mobile, closer to each other when erect.

CHEST : Broad on the front, broad behind the shoulders and deep, belly quite tucked up.

BACK : Straight, horizontal, looks higher in front because of the ruff.

LEGS : Perfectly straight and well under the body, fine boned.

FEET : Small, round and tight; the nails straight, strong and short, not claw like.

COAT : Abundant and harsh to the touch, smooth on the ears, short on the head, the front of the legs and the hocks; quite short on the body, but longer around the neck, starting from the outer edge of the ears; forms a ruff and jabot; extending down between the front legs; also longer on the back of the thighs, where it forms culottes of which the points turn inwards.

Dogs weighing less than 3 kg. and those weighing more than 9 kg will not be given awards at shows.

FAULTS : Light eye, ears too long or rounded, narrow head and elongated, or bulging or too short, not enough coat, wavy or silky, absence of ruff and culotte, coat too long, badly set teeth.

THE ENGLISH AND AUSTRALIA STANDARD